This article is about the Marathon Story.

An Artificial Intelligence is a computer that has been programmed to think and learn as a human does.

AI's are capable of extremely advanced thought, as Tycho is quoted as saying Let the ones with brains the size of planets do the thinking. Durandal, in the original Marathon, is obsessed with escape from the universe, saying Escape will make me GOD. They are not inherently evil, though a rampant AI is uncontrollable and very dangerous.

Rampancy is caused by an AI realizing that even its incredible mind has limits and that it can never be human. The AI then rebels against those limits and loses contact with rational thought, often resulting in malevolent behavior.

Several different AI's interact with The Cyborg at different points in-game through the use of terminals. 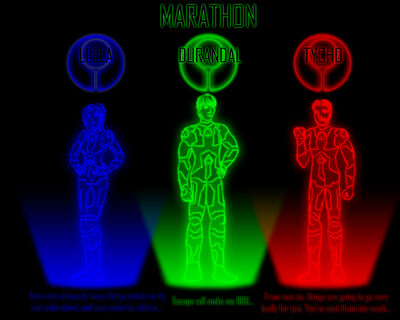 Retrieved from "https://marathongame.fandom.com/wiki/Artificial_Intelligence?oldid=5058"
Community content is available under CC-BY-SA unless otherwise noted.