Hunters are the strongest Pfhor infantry and are a rank above Troopers. The player encounters Hunters in all three Marathon games.

Like Troopers, Hunters only have two sub-ranks: Minor and Major. Minor Hunters wear brown armor and Major Hunters wear green armor. However, a stronger Hunter was introduced in Marathon 2: Durandal, called the "Mother of all Hunters." These new Hunters sported blue armor and were roughly one and a half times the size of the Major and Minor Hunters.

Hunters are decked out in heavy armor and equipped with a shoulder-mounted plasma cannon. They also have giant shields over both forearms. In Marathon Hunters had round helmets with a mouthpiece, similar in style to a knight's helmet and unlike the Pfhor fighters their third eye was on top.

In Durandal and Marathon Infinity their design was changed quite a bit. They still wear heavy armor, but their helmets have sharp spikes protruding out in all directions, and their third eye is on bottom.

The Zeus Class Fusion Pistol and the SPNKR SSM Launcher are the most effective weapons to use when fighting Hunters. There are no other weapons Hunters take additional damage from.

Hunters are immune to the TOZT-7 Backpack Napalm Unit.

The Zeus Class Fusion Pistol is the recommended weapon for slaying hunters as they take additional damage from this weapon. Grenades and rockets are also equally useful as Hunters have higher health than most other Pfhor.

Also note that Hunters will explode when killed by fusion bolts, missiles and grenades. The resulting explosion will damage anyone or anything near by. The explosion can even cause chain-reactions among groups of hunters which will clear a room in seconds. Players should be mindful of their distance to Hunters as the blast(s) can deal significant or lethal damage.

Mother Of All Hunter

The other Alien was named Hunter by the crew due to its size and appearance. It fires an energy weapon from its shoulder and is heavily armored. Unlike the Fighters, the Hunters never take prisoners.

The Hunter and his Hound, a scrapped enemy.

All the types of Hunters 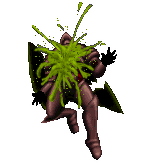