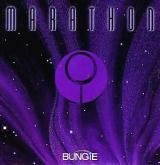 Marathon is a First-Person Shooter (FPS) that was originally released for the Apple Macintosh in 1994 and was subsequently ported to several other platforms.

Marathon was one of the earliest first-person shooters to appear on the Macintosh. Unlike many similar games of that era (for example, Id Software's Doom) Marathon and its sequels, Marathon 2: Durandal and Marathon Infinity were notable for their intricate plots.

Set in the year 2794 A.D., the game places the player as a Security Officer aboard the human UESC (Unified Earth Space Council) starship Marathon, orbiting the colony on the planet Tau Ceti IV. Throughout the game, the player attempts to defend the ship and its inhabitants from a race of alien slavers called the Pfhor. As he fights against the invaders, he witnesses the three shipboard AIs' interactions, and discovers that all is not as it seems aboard the Marathon.

The initial release of the game by Bungie was solely for the Apple Macintosh. In 1996, Bungie combined Marathon with Marathon 2: Durandal into Super Marathon, a port for the short-lived Pippin gaming console from Apple and Bandai. After all three games in the trilogy were completed, Bungie collected the series with bonus content into a single Marathon Trilogy box set, which was released on May 1, 1997.

After the code for Marathon was open sourced in 2000, the Aleph One project ported the game to run on additional platforms such as Windows and Linux.

Using Aleph One as a basis, the game was ported to the iPad in 2011 and is available as a free download from the iOS App Store[1] (the player may also make in-game purchases to add HD textures, Enhanced Reticules, or to enable "Master Chief Mode")[2].

Retrieved from "https://marathongame.fandom.com/wiki/Marathon_(Game)?oldid=7657"
Community content is available under CC-BY-SA unless otherwise noted.