View source
watch 01:54
Obi-Wan Finale - The Loop
Do you like this video?
Play Sound
Marathon 2: Durandal 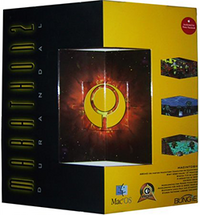 Marathon 2: Durandal was the sequel to Marathon. Marathon 2 begins 17 years after the first game ends, as the player's ship arrives at the ruined S'pht homeworld Lh'owon. Durandal (one of the Marathon's AIs from the first game) sends the player and an army of ex-colonists to search the ruins of Lh'owon for information that would give Durandal an advantage against the Pfhor, who are planning a new assault on humanity.

Among the new characters in this adventure are Durandal's evil counterpart Tycho, who played a minor role in the first game, a Lh'owon-native species known as F'lickta, an ancient and mysterious race of advanced aliens called the Jjaro, and the long-lost S'pht'Kr clan.

The game engine itself underwent several changes from its first incarnation. Although most of these changes were "under-the-hood", a few were visible to the user. The Marathon 2 engine offered performance gains on some machines, in addition to support for higher resolutions, higher color depths, and better quality sound. The enhanced engine also allowed the loading of maps from external files, allowing for users to (later) create and play their own maps.

The initial release of the game by Bungie was for the Apple Macintosh and Windows 95 (the first game had not been released on the latter platform). As with the first game, Bungie ported Marathon 2 to the Apple Pippin as well.

After the code for Marathon was open sourced, the Aleph One project ported the game to run on additional platforms such as later versions of Windows and Linux.

On August 1st, 2007, Marathon 2: Durandal was released on Xbox Live Arcade by Freeverse. Since the original game hadn't been released, the Xbox Live version was renamed "Marathon: Durandal". Multiplayer gameplay modes include Co-op, King of the Hill, Kill the Man With the Ball, Tag, and an all new Survival. [1][2]

Using Aleph One as a basis, the game was ported to iOS in 2011 and is available as a free download from the iOS App Store for most versions of the iPhone, iPod Touch, and iPad[3] (the player may also make in-game purchases to add HD textures, Custom Reticules, or to enable "Master Chief Mode").