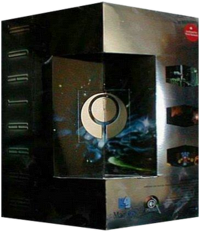 Marathon Infinity is the third and last installment in the Marathon Trilogy. It included a new weapon, more levels, a new texture set, and an intricate story with complex plot devices.

Marathon Infinity included more levels than Marathon 2: Durandal, which were larger, scarier, and part of a more intricate plot. The game's code changed little since Marathon 2, and many levels can be played unmodified in both games. Marathon Infinity was only released for the Apple Macintosh.

The most dramatic improvement in the game was the inclusion of Bungie’s own level-creating software, Forge, and their physics editor, Anvil. Forge and Anvil allowed a new generation of players to create their own levels using the same tools as the Bungie developers themselves.

Another improvement was the ability to include separate monster, weapons, and physics definitions for each level, a feature heavily used by Double Aught, who designed the Marathon Infinity levels. In addition to the three Marathon games, several games (e.g. Damage Incorporated and ZPC) used the Marathon 2 engine.

Marathon Infinity begins as the Pfhor destroy Lh'owon using a Jjaro-derived doomsday weapon known as the Trih Xeem or "early nova". Unfortunately, the weapon also releases a powerful chaotic being: The W’rkncacnter, which threatens to destroy the entire galaxy. Because of the W’rkncacnter's chaos or by means of some Jjaro tech of his own, the player is transported back and forward in time, finding himself jumping between timelines and fighting for various sides in a desperate attempt to prevent the chaotic being's release.

After multiple "jumps," the player (seemingly the only one who realizes he is being transported between possible realities) activates the ancient Jjaro Station, preventing the chaotic entity's release. The ending screen of Infinity leaves the story's resolution open-ended, taking place billions of years after the events of Marathon Infinity.

Despite the player’s being teleported to a Jjaro station by Durandal and left with a grim message in the beginning of Infinity, both Durandal and Earth did survive in the original timeline as can be seen at the end of Marathon 2.