The SPNKR SSM Launcher is a player wielded, shoulder-mounted, rocket firing Weapon found in all three Marathon games. Often this weapon is found later on in the game, or occasionally in a secret area.

The SPNKR SSM Launcher is an extremely powerful weapon that can obliterate large groups of enemies at once. Additionally, this weapon is one of several that has no secondary fire or mode.

The SPNKR SSM Launcher takes 3 seconds to reload, making it the slowest reloading weapon in all three Marathon games.

"This shoulder mounted device fires short range surface to surface high-explosive mini-rockets. Rocket velocity is 110 meters/second with a range of 2500 meters. Rockets explode on impact with a blast radius of 10 meters."
- Marathon manual

"A self-important human once said "...sometimes a cigar is just a cigar." This may be so, but in the case of the <<rocket launcher>> you've got one majorly explosive cigar."
- Marathon 2 manual 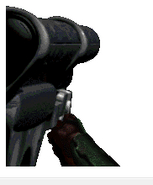 Rocket ammo on the ground
Community content is available under CC-BY-SA unless otherwise noted.
Advertisement