Thoth is an ancient AI, created by the Jjaro and given to the S'pht'Kr. He is an enigmatic, powerful being. Although he only ever speaks in strangely written, choppy free-verse poetry which is hard to decipher, he has very definite goals. He seems to care little for the wars between the S'pht, the Pfhor and the humans, serving only to keep the W'rkncacnter imprisoned.

In one of the potential realities created by the waking of the W'rkncacnter in Marathon Infinity, he merges with Durandal, creating a strange hybrid.

Thoth is obsessed with balance, as he has been known to help Robert Blake and his forces when they are losing the war and then switch sides to help the Pfhor when the tide had turned in the humans' favor in the events of Marathon Infinity. 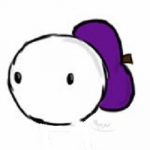